Tuffurban sits down with “The man with a million spins” Mr. Vince Ngu

Vince Ngu is a veteran night club owner, concert promoter & DJ who has been in the industry representing Edmonton for over 20 years. He’s seen it all…. from partying in a van, to bringing Usher to E-town back in 96’ to concerts turned Riots. He’ll tell you anything you need to know about Edmonton’s nightlife and keep you dancing all night long. Tuffhouse had the opportunity to sit down with him in between his busy schedule and enjoy some Mexican delights at one of his DJ venues El Cortez. 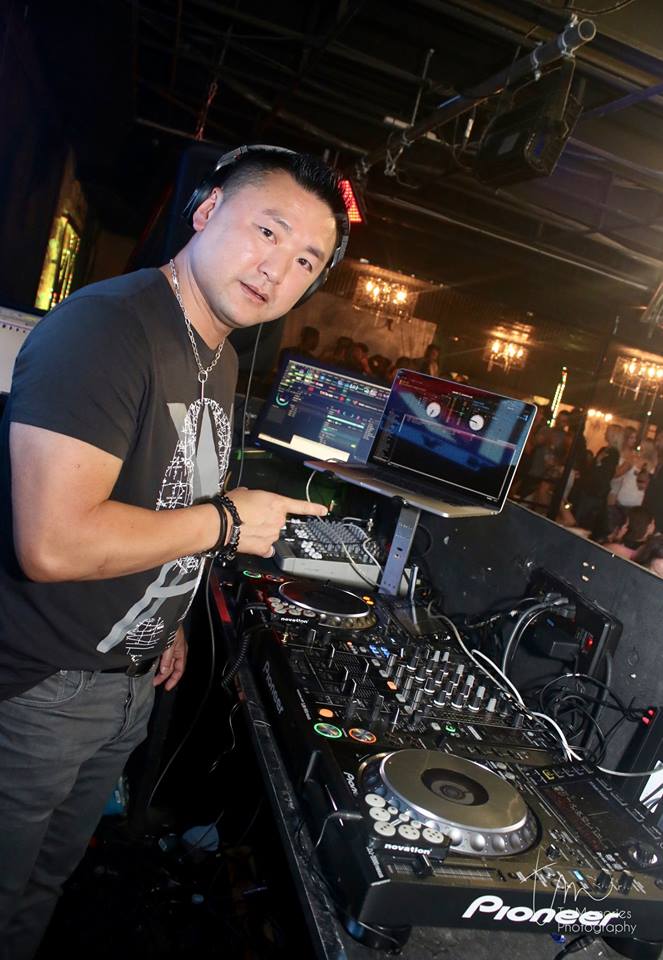 Who is Vince? What does he do?

Vince: I do a lot of promotions for nightclubs, concerts & special events. I DJ, I introduce new products to Edmonton.

Where are you from?

Vince: Originally born in Vietnam, I’m Vietnamese. I came here a long time ago I don’t wanna say how long. About 30 years ago. Havn’t really been back. I pretty much based myself out of Edmonton since I was a kid. I’ve built my foundation all within Edmonton.

How long have you been in the industry for? When did you begin?

Vince: I pretty much started when I was a kid doing hall parties, I think when I turned 18 that’s when I started doing it in the nightclubs. So I would say I’ve been doing it for easily 20 years. Still lovin’ it, still enjoying it. I think I have a couple years left in me.

What’s the most challenging scenario you’ve faced as a promoter and how did you overcome it?

Vince: I would say taking clubs that need my assistance the most when say, they are about to close down or they’re not doing so great. Asking me to take on their name and their product & change it for them, make it busy again for them. That would be my biggest challenge is to work with clubs and hopefully bring the clientele & bring the music that they want. To make it an establishment that eventually everyone wants to start going to. When it comes to overcoming those obstacles it’s all hard work, success doesn’t come overnight. I think we all started from giving out flyers when we were young, to flyering cars, through the years I built my fan base through social media, my phone contacts. Just putting it out there for people to know. Just because you open the door doesn’t mean people will come. You have to really push it and let people know what’s going on, invite people out, take care of them when they come out and just be nice to them, appreciate their support. Because when you do need them they will be there for you. That’s how a lot of my nights were successful. Is from having the proper support from everyone who’s been supporting me since the early 90’s.

Is bottle service worth the money?

Vince: Bottle service? It depends on what the price of bottle service is at. Bottle service is good to have when you’re with birthdays and parties. Like I say it’s something a little more VIP exclusive, it’s not for everybody. A lot of people just like to drink and buy drinks from the bar. Other people like to sit while other people serve them. It’s just a preference of what you prefer, and how much you wanna spend when you go to a club. I try and provide all those services for everybody when they come.

What’s the most original stunt you’ve seen someone use while trying to get into the club?

Vince: The best one was somebody said that she was my cousin, and it was my cousin at the door working. And she said “you can’t be his cousin cuz I’m his cousin & I don’t know who you are”.

Who do you consider to be the top two club promoters of all time?

Vince: It’s hard to say because there’s been so many good promoters throughout the years. I give credit due to a lot of the promoters from back in the day, Urban Metropolis, they’ve been around for a long time, 780 events has been around for a long time. Everybody has their own niche market. Up and coming promoters now, Even Rutherford, Havana Green @ Tuffhouse he’s done a lot for the city, and put a lot of good shows on the map. We havn’t really worked with each other but I respect his grind & I know we all have been workin’ hard to be where they’re at right now. Some stay around longer, other maybe move onto other things. It’s for the love of it, if you enjoy it you’ll continue to do it.

What made you want to get into this business and what do you love about it?

Vince: I got into this business when I was young because I like entertaining and making people have fun. I’ve always rounded up my friends to go to the club, to go to this party, that party, and eventually I was like I should just throw my own party. Why don’t I just open up my own club and throw my own club night so my friends can come see me., that way we don’t have to run around the city looking for places to go. And I think it happened one year when I was always throwing New Years Eve parties. One year I was like “I’m gonna take this year off and go party with my friends”. We ended up partying in a Van because there was nowhere to go. From that point on I was like you know what, I think I’m made to be throwing parties so people have somewhere to go and come visit me.

What’s the typical lifespan of a nightclub?

Vince: Typical span of a nightclub back in the day I would say around 6-7 years but now with the technology and the social media and so much going on, clubs nowadays maybe 2-3 years, then people want to change, people want something new. Back then there were less clubs so people stayed in one spot. Back then there were way less urban clubs, you could only go to one or two if you wanted hip hop music. Now everyone in the city is playing hip hop so it’s pretty much commercial.

Vince: Kind of hard to say because I like all genres of music. But I think Torri Lanes “Love” but I’ll probably get bored of it soon.

What style or genre of DJing do you prefer?

Vince: I kind of like all styles right now because I have certain DJs that play for me that focus on hip hop or focus on Dancehall. I’m kind of like the fill in DJ where I’ll play Reggaeton if I have to, I’ll play Dancehall if I have to, I’ll play Afrobeats or hip hop. It all depends on what my DJ has already played, then I come on to switch up and change the vibe, I’m all over the place.

Where do you usually DJ in the city?

Vince: Right now Toka Tuesdays at Mixx, Old school/ Throwback Thursdays at Plus One, Fridays at Vida nightclub, Saturdays at studio 107, before that I was doing two Saturdays one at Boulevard & one at Studio 107.

What in your opinion is the most under-rated City in terms of clubbing?

Vince: I work so much in the city I don’t get a chance to really go anywhere, but from my experience I would say Montreal would be one of the top cities, if you want all different cultures, Toronto aswell, I think Edmonton is up there too we just don’t have quite the population.

Have you seen anything particularily innovative at newer clubs besides your usual scene?

Vince: I think most clubs are pretty basic right now, that’s why my partners I, we just introduced a new product line for the club it’s called the “Silent Hush Headphone Party”. You have three channels of music with multiple DJ’s in one room, we just did it over one weekend and we sold out, it was everybody listening on their headphones to different DJ’s playing all night. All in one room. So it was like EDM, Hip Hop, Dancehall. You get to choose what you want to listen to, and everybody just singing along and enjoying themselves.

What sort of concerts have you put on? Any in particular that stand out?

Vince: I remember when I first started back in the 90’s with Usher & Mase & Lost Boys and then Beanie Man, Sean Paul, Snoop Dogg. Endless shows you know what I mean. I don’t know if I ever had a favorite that I’ve done, it’s really hard to say because I’m usually behind the scenes. The one maybe I’m the most proud about even though I lost money was Usher back in 96’, then he came back 20 years later and I told him that he owed me a picture and him & I took a picture. Something like that for him to remember after 20 years that you were the one who first brought him to Edmonton, was kinda like “Hey I’m glad I did that show”.

Craziest thing to happen at a concert?

Vince: It was a YG concert at Encore, there was a riot. He threw water into the stands and there were bottles being thrown everywhere. It was a sold out show but it just turned into a riot.

Most memorable moment in the industry?

Vince: Most memorable moment would probably be just working with everybody throughout the years. There’s been a lot of great people to work with, good clubs, good owners, good partnerships. You go through different decades and generations of people you work with, it’s different everywhere. I stay loyal and I stay with them until they close their doors, that’s how I usually do my business.

How do you feel about the Edmonton Music scene?

Vince: I think Edmonton’s probably got one of the top local music scenes, a lot of festivals. If we all got together and supported each other, it’s endless where you can take it. Everybody’s got to support each other in order to make it successful. If you’re hating on each other and not supporting each other the scene itself would not grow.

What are some of your pet peeves?

Vince: Pet peeve would be if I’m messaging people to come out all day and I’m texting them but they don’t reply until they’re at the door and they’re asking me to get them in. And I’m like “you had all day to message me, and you wait until you’re at the door to ask me to get you in for free”. That would be my pet peeve.

If there were a movie written about your life, what would it be called and who would act in it?

Vince: Maybe I’d make it a good comedy movie like and Adam Sandler movie where maybe the promoter has been around for so long, past his prime but he’s still in the club just kickin’ it.

It’s funny I’ve been in the industry for so many years and I still don’t drink, but I’ll have a shot here and there and the odd drink. I’ll always have my Red Alize and Seven Up.

Favorite Sport to watch & to play?

Vince: Shoutout to all the DJ’s in Edmonton, all the promoters working hard. I think everyone deserves their credit for their grind. I’m willing to work with everybody. I enjoy working with everybody, just building that working relationship. Like I said if we all support & help each other out and go to each other’s club nights. I think the city should all come together and support each other rather than hating on each others events. Magazines, shows, concerts, local artists, I try and support as many people as I can.