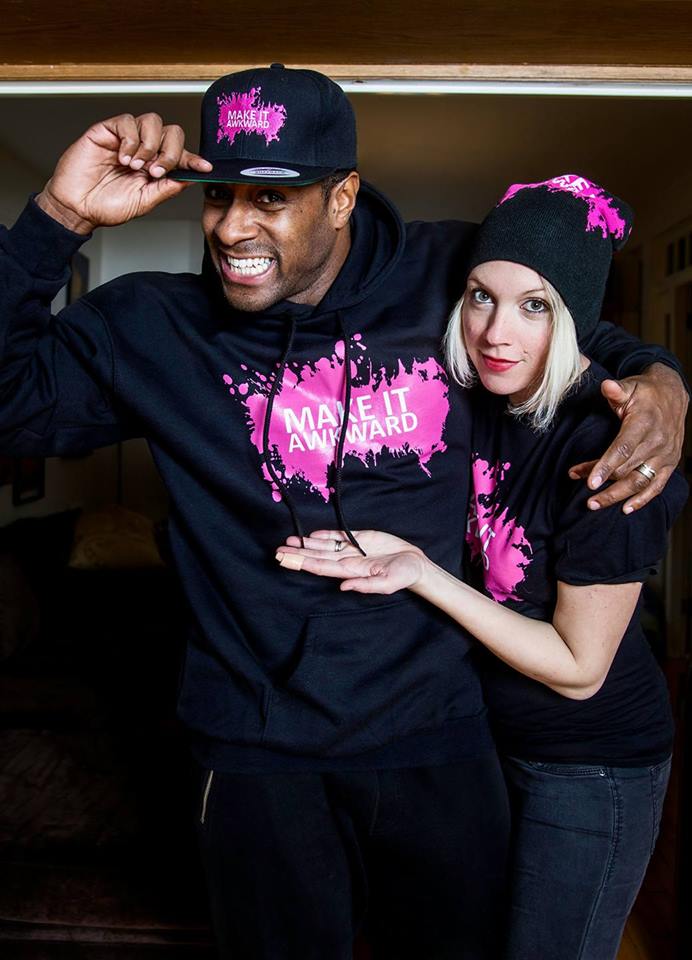 Jesse Limpscombe is an Edmonton born and raised Celebrity. He is an inspirational and internationally known entrepreneur, actor, producer, athlete, musician and father of three. In 2016, Jesse fell victim to and caught on tape an incident involving racism. Which he then, with the help of his wife Julia and the mayor of Edmonton set in motion as an idea for a fast spreading, constructive and widely supported anti-discriminatory Campaign called “Make it Awkward”. A new way for people to confront issues such as but not limited to: racism, sexism, religion, disability or minority based slander, bigotry and harassment. The public has since responded with massive support. The team are making their rounds to schools, job sites, even the political scene to help educate. Jesse has acted & produced in film and television with some of Hollywood’s greatest. He owns many businesses & keeps busy with his family and his many loved art forms . You can definitely count on his creative energy and mind to come up with new ideas and projects in the near future. Little did we know Jesse even sang on the soundtrack to VH1’s “The Man in the Mirror” a Michael Jackson story. TuffUrban had the opportunity to sit down with Jesse and discuss his exciting lifestyle & learn all about his Campaign “Make it Awkward”. Guaranteed, this is an interview you won’t want to miss. Enjoy!

How has the public been responding to the campaign so far?
Jesse: The public is overwhelmingly in support of it, but with that comes other sides of it too. The one thing that I’ve noticed, with positivity and love, a lot of people question sincerity. I don’t know if it’s the human condition, the belief that people really just wanting to help, means that they have ulterior motives. That seems to float around. The vast majority of people all ages have been behind it, all sexes have been behind it, all races have been behind it which is really nice. So for sure the support outweighs any of the negativity. 100 hundred people can say “hey I like your outfit you look great” and one person doesn’t and that’s all you think about. This is something it’s not like we get paid to do it. We make money when we speak from time to time or when we sell merch to be able to afford to fly to Toronto and do other things like that, but at the end of the day it’s a campaign for the people by the people, and we’re just kinda driving it.
As a Hip Hop label our artists face many racism issues head on frequently. Do you have any suggestions on how to tackle these issues in the music industry?
Jesse:  The music industry in my opinion is a touch hypocritical in regards to racism and sexism. Because you know you take Hip Hop Culture, you can take country music culture. The misogyny that exists in it and the double standard racism in regards to a racial slurs that have become terms of endearment. The confusion in junior high schools of what to say and when they can say it, there’s a lot of work that can be done I think for sure within the music industry to help squash some of the negativity that surrounds both of those things. I think that is kind of a piece of the responsibility. I think also in the music industry, the idea of making music so people will buy it, unfortunately sometimes that means making music thats not quite resonating with who you are. It’s so confusing sometimes because you know gangsgter hip-hop sells well and has for along time, but I mean consious hip hop sold well before that. You have to kind of make your decision of who you are and what legacy you’re actually leaving. I think it’s important to think about that. It takes a certain amount of courage to make some dope ass positive consious hip hop in a sea of people succeeding with the anti-thesis of that you know.
What’s your least favorite thing about humanity?
Jesse:  My least favorite thing about humanity would be humanity’s lack of faith in their ability to do anything. The human potential is amazing and how powerful every human being is. I think somehow, somewhere along the lines we’ve convinced ourselves that we can only do & achieve so much. The rest of it is for a different type of person, a different kind of person when in reality we can all do such amazing things. I think we’re only scratching the surface of what we’re here to do and what we’re capable of.
You’re a father, actor, athlete & entrepreneur. Can you tell us more about your other careers, how do you handle your busy schedule and family with so many projects on the go?
Jesse: The nice thing too, it sounds like I do a ton of stuff. I could have a nine to five job and then try to do those things, I could have a job so I can just pay the bills, and then with my free time do the things I’m passionate about. Instead I tried to do the opposite of that and make a career of my passions. My days are really organized, When I’m working at the fitness studio, when I’m working on flow-power which is another fitness company. When I’m working on producing a film, or making music, these are contracts and projects that aren’t 9-5 throughout the days, so I carve space out for things I’m really excited about. I’ve gotten better at creating the space for things that make sense for my life, financially as well as things I thoroughly like doing. You know it seems like there’s a ton out there, it’s mostly business, used to be sport not as much anymore, and entertainment which is 90% Film and Television, 10% music.

Where are your favorite places to eat in Edmonton?
Jesse: I gotta say “Sabor”, but if I were to jump on board you know “Tres Carneles”, another beaut. You know really my little guilty pleasure is “All Happy Family”. A little bit of everything.

Who are some of your role models?

Jesse:  It was a difficult question before to find a person who is a role model because I often find pieces of many individuals. I kind of treat life like that… I love stealing from the greatest and making it my own, the things they do. Barack Obama has just destroyed 8 years in one of the hardest positions ever and did it with such class and he’s so cool! he just made classy super cool which was really neat and he juggled. Richard Branson’s another one, with the amount of businesses this man owns and how introverted he is, and how shy he is as a speaker yet he always challenges himself to do something new. Blake probably another one he is the owner of Tom’s shoes, his idea of having a private for profit company that’s focused on the good of humanity. These are all different individuals, the one I’ve never actually had any real one on one contact with was Barack, but that’s today. We’ll see what happens in a couple of weeks, who knows.
If you were given a million dollars in order to launch your next best entrepreneureal idea, what would it be?
Jesse:  As a serial entrepreneur I try to launch those all of the time. Also as a serial entrepreneur I know that I would not publicly let you know what my next million dollar idea is without a mutually non-disclosure agreement that everyone who reads this would have to sign. But none the less that being said of course I’ve got a couple in the wing. Some of them need funding, some of them need time but none of them have any barriers it’s just a matter of when you push go.
What was it like working on an Emmy nominated televsion show or on a movie set?
Jesse:  It was great. The first movie I ever did it was a TV movie called “Children of the Dust” with Sidney Portier, the first African American Oscar winning actor. I played his son, in that show. It was really a great intro into the film industry & television industry for sure. Luckily I’ve gotten to work with a lot of Hollywood greats and watch how they work on set and like I said I’ve been stealing from them and trying to make it into the best that I can be. It’s like athletics, it’s like music you have to practice and train, you have to love it in order to do it, even during the hard times, because that’s what makes you better in the times that count.
If you were a cartoon character who would you be?
Jesse: If I were a cartoon character I would be Tigger, but I would change my name to “Tigro” because Tigger’s a little too close if you know what I mean.
If you could give anyone, a young child or an adult dealing with racism personally for the first time, a word of advice what would it be?

Jesse: The word of advice would be that you’re not alone and often times when you become a victim you become a little recluse and you feel like you’re by yourself and you don’t want to talk about it, you might not want to sound weak or you might not want to ruffle feathers depending on what your social status looks like. As a youngster or even in the workplace. To have the confidence that you’re not by yourself and the vast majority of people will support you when you need help, if you ask for it you will probably get it.

What’s the most challenging thing about being in the public eye and being someone that people look up to?

Jesse:  I was just talking about this today with a friend, about the most challenging thing. It’s like this, public perception vs. personal reality. I find the more that I am acting as my true self and being really free and comfortable even though it’s in the public eye, the more people doubt and question the sincerity & genuine nature of what I am doing, and always wondering if there are ulterior motives for what it is. So it’s you know, it’s tough to ignore things when you hear them. People feel ways for a reason sometime. How people feel about me is none of my business, is a quote I’ve heard. But I also kind of enjoy feedback from the planet I live on. It’s a difficult thing to take critical and positive feedback but also not let negative feedback bother you. I think I do a good job of not letting it bother me, but I’m definitely not blind to it. I see how it affects my family as well, because they’re like “that’s crazy, they don’t know you, why would people wanna make up lies about you!?”. That part I don’t like, because it bothers them more than me. I’ve somehow calloused myself to it because it’s been a part of me since I was a young, like elementary school. That’s kind of been the case, if I could pick one word that might encompass me it would be misunderstood. Also you can’t spend your life trying to convince everybody. It’s a small group of individuals that know me & that I spend my time with and people who inspire me whom I can grow from.