Home > Uncategorised > TuffUrban Digs up the Relic of RELLIK

TuffUrban Digs up the Relic of RELLIK 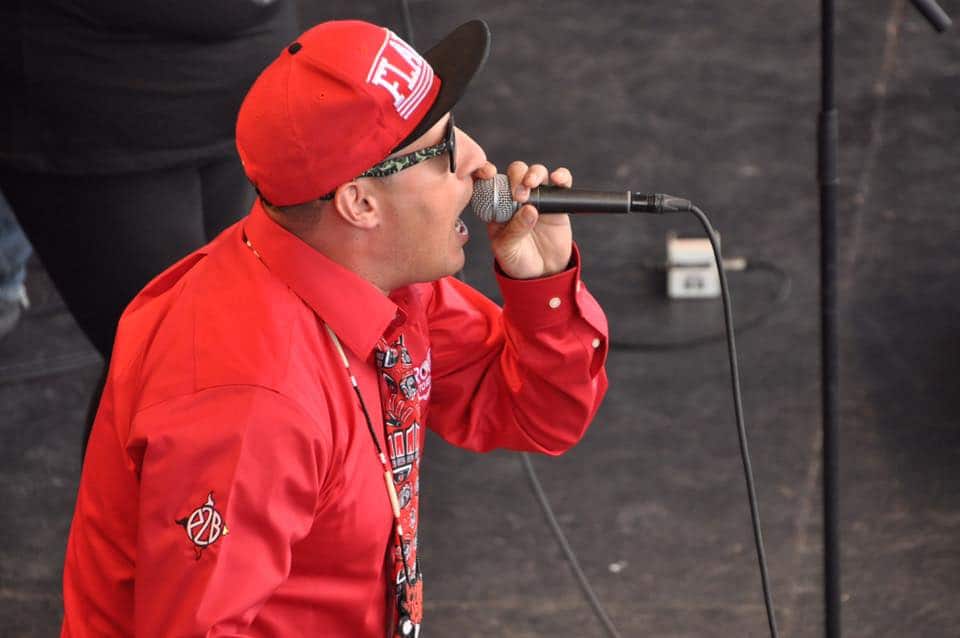 RELLIK is a Multi award winning Aboriginal Hip Hop Artist from no other than our home base Edmonton Alberta. He is actively involved in numerous causes and charities in the city and beyond. While holding down his very successful music career aswell as work, he is a proud papa & husband. His unique talent, charisma, perseverance & purpose has attracted a wide array of fans & supporters and recently various Television & radio networks such as CBC & City TV to name a few. He has become a Cultural role model. There seems to be no turning back now for this MC. He’s on fire and we can’t wait to see what he has next in store. Here’s what Tuffhouse got to know about Mr. Bill LeBlanc A.K.A RELLIK. Enjoy.

Rellik:  My name is Bill LeBlanc ( Rellik ) . I am a Father and multi award winning hip hop artist by night/workin man by day.

*Where are you from?

Rellik:  Edmonton for my whole life.

*How long have you been a hip hop artist? What made you want to become one?

Rellik: Ive been writing rhymes and rap songs since I was a kid in the late eighties. Through the nineties ,           I already had a radio program on CJSR and had been rapping with a few crews. I started a solo career about 10 year ago and truly only consider myself doing this professionally for about 5 years now. Ive had musicians in my family for generations so I consider a lot of my ability to be genetic.  But I can’t lie. I was that kid singing Michael Jackson in the mirror until I heard my first Run DMC tape.

*Who is your biggest role model?

Rellik:  My biggest role model without a doubt is my late mother. She was a strong woman and loved to help others which was enstowed in me.  Although she wasn’t a musician , she  loved music and always had something playing. She also encouraged my music from when I was a little boy on the guitar, and then continued when I started doing hip hop at a young age.  She’s why I am who I am today .

Rellik:  I’m a proud native person and was always raised to be so. So since the early days of this hip hop, I’ve tried my best to speak out to my people and also speak out FOR my people. Whether it’s racism, suicide prevention , depression, environmental issues, missing Indigenous women , or poverty to name a few. These are all areas that hit our communities the hardest and I do what I can musically to help my people better themselves in these areas.  As for the future, I truly believe we are in a place in time where Indigenous peoples are uniting across the entire planet for to protect the earth and also be treated fairly. Non Natives are also speaking out against these same issues and standing beside us which is great to see.  We are amidst the 7th generation prophecy as a lot of us believe as it was told 7 generations ago.

*Are there any other specific causes you passionately support?

Rellik:   I’ve supported and stood behind so many causes and organizations because its what I love to do as a community member and a person. Anti bullying , MMIW , Suicide awareness, Stollery Children’s Hospital, Edmonton Public Schools, United Way , Boyle street services, GINA foundation for missing persons etc. They’re all great organizations that help people in need. My music is just how I am able to contribute the most.

*What’s the most challenging experience you’ve faced as an artist? How did you overcome it?

Rellik:   I think the challenges are all the little ones you face throughout this work as an artist. There’s a lot of rejection in this industry but you have to just take it in stride and keep on grinding.  The business aspect of the music industry takes a lot of time and perseverance . Me specifically , my biggest challenge is the balance of time. Between my family , kids, my day job and the music.

*How do you feel about the Edmonton music scene?

Rellik:  I love Edmonton’s Music scene. I’ve seen this scene thrive in the nineties, then die in the 2000s. But I definitely think it’s back. The venues bringing live music and open stages back has really helped the scene in general. As for the hip hop scene, its definitely more unified than years prior as well. Still not to where it should be , but people are trying to work together more and more I think. There’s so many great bands from Edmonton in all genres.

*What’s your most memorable moment as an artist?

Rellik:  Thats a tough one because I have so many. The award wins and big stages and crowds usually sit the highest. If I had to choose one it would probably be walking the red carpet at the 2013 Indigenous Music awards , already with an award in my hand from the award show the night before and then interviewed live on APTN.

Rellik:  I’m always collaborating with different musicians and or MCs. Singers , Country, Rock , Players of various instruments,  as I play a lot of shows with a full or partial band, I usually collaborate with rappers that are local to Edmonton and have had a few solid MCs on the last couple albums

*How can fans gain access to your music & when is your next performance?

Rellik:  My handle on most accounts is “rellik118”. Facebook, Twitter , Instagram, Youtube, Reverbnation, Soundcloud etc. even Myspace hahaha just kidding.   My next performance will be Oct 15 at the Ramada hotel, for the 7th annual anti-bullying event. Ill be playing with the full band. The week after, we’re off to do a weekend of shows in Saskatchewan with a partial band.

*If you could have one superpower what would it be?

Rellik: To see spirits that walk amongst  us

*If there were a movie written about your life what would it be called and who would act in it?

Holy moly. These are getting tough hahaha.  I would honestly probably call it “The Dream “, like the latest album, because that’s where it started when I was a kid. It would be a great movie and incorporate a lot of the years of work , along with the family and home life. For actors , I dunno. Kryple from Doom Squad can play me haha. If he’s not available…  then Bobcat Goldwaith from Police Academy.

Rellik:  I love all food so much but I really have to watch my eating , to incorporate the diet within my gym training.  But for a cheat food I love a greasy burger or pasta.

*Do you have any other talents?

Rellik:  I play pretty decent guitar and have played since I was a kid. I also like to consider my personality and ability to network, a talent.

*What’s your philosophy towards your work?

Rellik:  Hard work will eventually pays off. If you’re gonna do something, do it right.

*What time do you go to sleep?

Rellik:  It depends.  Some nights after work, gym , dinner and the kids are settled, I’ll go to bed around 10 but if I’m up working on a song or doing business, Ill push it to 12. 6 am comes early and then get to do it all again.

*If you were to buy a yaght what would you name it?

*What are your pet peeves?

Rellik: People that feel that are always right and know –it-alls. Also anyone that gets swallowed  and consumed in negativity. I can feel a negative aura from across a room and do my best to stay away from it.

*If you were a cartoon character who would you be?

*Who are your top 3 favorite artists or bands?

Rellik:  So tough cause I’m always listening to so much and enjoy a lot of music . Right now I really like the new Billy Talent stuff, and for all time maybe Ramble on by Zeppelin or Baba  O’ Reily by The Who.  For Hip Hop all time , Microphone fiend by Eric B and Rakim.

*What’s the craziest thing to happen at one of your shows?

Rellik:  Dudes taking off their shirts have always weirded me out. A memorable one was a guy in Northern Manitoba stopping me between songs to say thank you for the songs and offer me a ring off his hand. Oh and that one time Billy Black out got bottled when we opened up for Kardinal Official and had to take him to emergency haha.

*Do you have a motto?

*Any advice you would give someone just starting out in this industry?

Rellik: Make sure you’re also focusing on a real career and or solid day job. This music isn’t gonna feed you for awhile so be prepared. And don’t release your first song cause you want all your friends to hear it. Refine it and sit on it . Work on it. Then release it when it’s ready. First impressions can be everything.  Most music listeners these days have an attention span of a squirrel so make it count.

*What is your favorite thing about being a Canadian?

Rellik:  Being Metis and coming from rich and diverse cultures. My Great Grandparents were Alberta pioneer settlers from Manitoba. I love the cultural diversity seen through  out the entire country.

*Any shout outs? My management , IDVIP team .,Label ,New Leaf Entertainment and Plex, any promoter, DJ , TV , Radio host , Booking agent , or bar owner that’s ever let me rock a stage or gave me a chance in the last 20 years. My wife, kids and entire family.  My band , the Dirty Boots , and any musician that’s played beside me over the years. And anyone that’s doin’ this hip hop or music in general out of Edmonton.