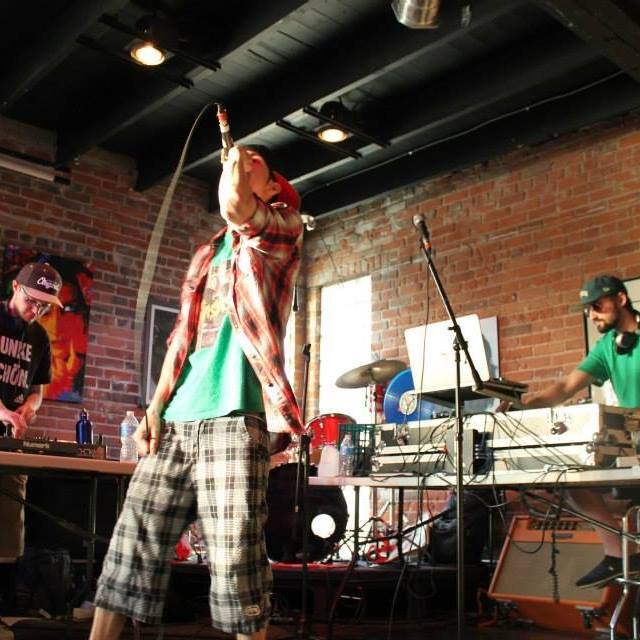 What’s your favourite city?
Vancouver. I would say Edmonton because I was born and raised here; but other than that, Vancouver is my favourite city

Who’s your favorite artist of all time?
I’d have to say Everlast. I grew up with him, I’ve been listening to him since I was like 8 years old, when he was in House of Pain

What musical trend would you like to see end right now and never, ever come back?
Uhm, [laughs] rappers who can’t rap, like, “Panda,” what’s that guy’s name, Desiigner? I mean, they can’t even really talk properly and they never really say anything. It’s not really rap, it’s just mumbling over a beat. I’d like to see that end

What’s been your favorite collaboration to take part in so far?
I’d have to say with KazMega and Locution Revolution, we did a track called Rambunctious, and it’s definitely my favourite collab so far

Who are three artists you would you like to work with in the future?
Nas, Everlast, and locally, Snak the Ripper

What made you want to be a hip hop artist?
Uh, well, I’ve listened to it my whole life. I love the lyrics, I love the freedom, the style. Ever since I was young I wanted to be an artist, a lyricist

What’s the advice you’d give to somebody who wants to follow in your footsteps?
Work hard, don’t drink and piss your life away, stick to your guns. Basically, don’t make the same mistakes I did when I was younger. Um, yknow. I did a lot of stupid things and I didn’t really fully get serious about it for a while. Really be seriously dedicated to it, one hundred and fifty percent. Write every day, even if it sucks. Listen to music, and not just your own genre. You gotta listen to it all, y’know? Whatever it is you’re doing, always go a hundred and ten percent

How long does it take you to write a song, on average?
Oh, that’s tough. I’d say it would take me a good solid hour or two

What’s the hardest thing about your job?
Just getting my name out there, and trying to balance the everyday work life with coming home and doing what I do

What inspires you, in general?
My daughter. Y’know, she inspires me to not look back and to live my life with passion and purpose

What are three artists you’ve got bumpin’ right now?
Snak the Ripper, Everlast, and um…what else am I listening to right now? Kid Ink. I don’t know why, but I like him. I’m tryna, you know, not change my style up, but listen to different styles of rap

Are there any myths about the industry you’d like to dispel?
I guess, y’know, rappers who rap for free thinking that they can still make their money. You gotta hustle. I’ll give away a chorus for free and stuff, but you’ve gotta come to a point where you’re serious about your career

Is we finish, or is we done?
We finish

What do you have coming up that we can all look forward to?
I got, um, I’ve been working on a little secret album, I just released my “Scarred for Life” album, and I got this album, “Just Another Whiteboy (Self Titled),” which should be coming out in probably October, I’m lookin’ at. And uh, other than that, my Green Heist movement, I got a bunch of videos coming out that I’ve been working on day and night

What, to you, is ‘Living the Dream?’
Being able to wake up and put in eight or sixteen hours per day into my music, and accomplishing that every day. And um, y’know, going to sleep with a smile on my face

Any shoutouts?
Yeah, obviously to Tuffhouse Records, they have helped me over the years, somewhat guided me. And to all the artists I’ve worked with, whether it’s on a show – y’know, Brothers Grim, Future is Grim, Sonik Hip Hop, Proveli Paragon, he’s in the studio over there. And my little brother, most importantly I’d like to give a shoutout to him ’cause he’s always stuck by me in a big way

Bonus Question: With the legalization of marijuana at the helm of North American politics, what do you have to say about legalization vs. decriminalization, and the war on drugs, in general?
Well, legalize it. it’s long overdue, and yeah there’s a lot of red tape. Just get it over with and legalize. As far as the war on drugs goes, just look at Portugal where they decriminalized everything. It seems to be working for them! But uh, I’m a big cannabis head. I love it, I love everything about it, just legalize it so we can, y’know, do what we do – whether it’s cooking, therapy, recreational use, medicinal, just legalize the damn thing already

Bonus Question #2: What is your opinion on how best to handle the recent wave of racial intolerance, violence, and injustice that has been on the rise in North America? Do you feel that as a hip hop artist, you have any responsibilities in this regard? Why or why not?
Saved the tough one for last hey? [Laughs] well, I mean, it’s raw. I can’t stand it. I have a daughter, she’s 4, and I show her how to love. We were just at the Latin Music Festival to show her the culture, and I love the culture myself. Cooking, that’s my other little passion, food is good for multiculturalism, for countries an communities coming together and just loving each other. I think what’s going on right now is completely twisted, uneven, and it’s f*cked. Everybody’s ripping each other apart, and it’s completely sick. I mean, it’s tough because it’s a global thing. I don’t think it will ever end, but all we can do is love each other. As far as responsibility, as an artist that is for us to work with our fellow man, woman and et cerera that came with a message.To be an artist,  your responsibilty is to have a message and to have your message  heard is the responsibility