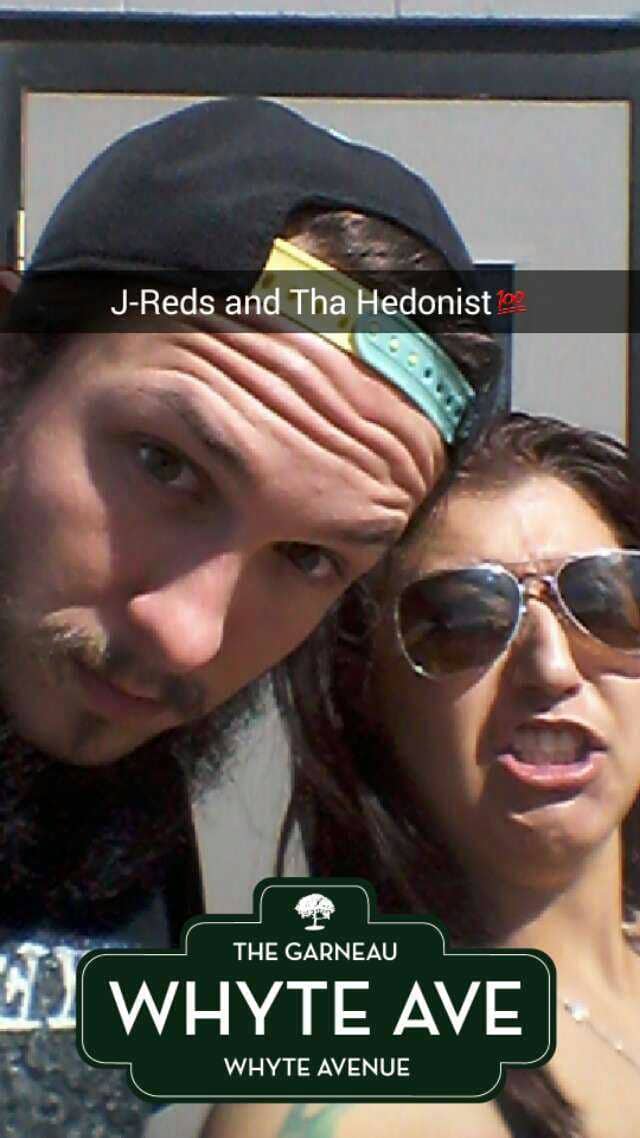 How long have you been making music?
Thirteen, fourteen years? I started smashing on drums when I was like three or something like that, but actually making music, it’s been over a decade

What’s your favorite food?
I gotta say perogies, but they have to be homemade to count as a favourite. None of that Cheemo shit, that doesn’t count [laughs]

What’s your favourite city?
Other than obviously this one? Vancouver is probably my favourite place to be. I have a little hip hop family out there, I love it

Who’s your favorite artist of all time?
Eyedea. Jimi Hendrix and John Lennon are close seconds, though

What musical trend would you like to see end right now and never, ever come back?
That’s a hard question. I’ve hated on everything at some point, but I eventually come around and accept that everything has a place. But if I had to pick it’d be like, that useless triplet slur southern trap rap that’s very, very popular for some reason right now. New kids are allowed to make whatever, but it’s super embarrassing when the forty plus year old rappers try and do it to be hip

What’s been your favorite collaboration to take part in so far?
Oh man. I’d probably have to say the last album I did with DJ Weezl, Animal Controls. It was definitely the most difficult release I’ve ever had [laughs] but Weezl is an enigma, and he’s great to work with

Who are three artists you would you like to work with in the future?
The Godfather, Slug (Editor’s note: of rap duo Atmosphere)  – I almost got him to rap battle me once! Other than Slug, Dessa for sure, and  Alyssa Marie – she just kills most people at rapping

What made you want to be a hip hop artist?
[Laughs] uh, God Loves Ugly. That album showed me that hip hop is whatever you make it, and as long as it’s real, people will receive it. I mean, how do you not receive real? And shoutout credit to Immortal Technique. Can’t forget him

What’s the advice you’d give to somebody who wants to follow in your footsteps?
Um, it’s gonna get worse before it gets better, but it is gonna get better [laughs]. And don’t be a hater, stop that

How long does it take you to write a song, on average?
If there’s no collab, and it’s just the lyrics, at least two hours. I kinda get everything written in the same day, if it doesn’t happen that way I usually scrap it. Hard to get back into the same brainwave. Let the chips fall where they may, in that regard

What’s the hardest thing about your job?
Tryna maintain balance, for sure. Tryna find time to make everything that’s a priority get the attention it deserves, and not let the little things fall thru the cracks

What inspires you, in general?
Uhm, the desire to grow, to help those around me grow, to pass on messages that other people helped me to learn. Tryna build a life for me and my girlfriend – adulting, you know?

What other styles of music inspire you?
Hip hop is about the least inspiring genre to me [laughs] It just happened to be what I do. Early 2000’s pop punk, psych rock, old school classics. There;s a lot that gets labeled as hip hop that’s more indie folk, like Cheskey

What are three artists you’ve got bumpin’ right now?
A lot of P.O.S. with the show coming up, been listening to a lot of Cynic – a weird old metal band, I just love them – and  I’ve been bumpin’ Dessa to the point where it’s pissing me off, but I can’t do without it. There’s nothing I can do about it, she’s so damn good I have no choice

Are there any myths about the industry you’d like to dispel?
That formulas exist. They don’t –  everything is permanently and comtinuously changing and growing and shifting quicker than ever before, even just with communications. There’s no formula, you gotta just figure out how the next ball’s gonna roll. Repetition doesn’t usually work

Is we finish, or is we done?
We done,we done.

What do you have coming up that we can all look forward to?
Couple things – Mule Fest at the Starlite Room. The official announcement isn’t out yet, but a Stompdown Killer is coming soon;  and then, we’re looking at announcing a memorial show for a certain fallen hero – Murs , DJ Abilities, and Carnage are coming out

What, to you, is ‘Living the Dream?’
I think as long as like, uh, you’re doing what you love, that’s living the dream – whether you’re succeeding at it or not. Failing on your own mission beats succeeding at one you don’t care about. If you’re all in, then you’re all there. It isn’t always pretty -I mean, they don’t emphasize the ugly parts when they talk about it, but they’re still part of the dream

Bonus Question: With the legalization of marijuana at the helm of North American politics, what do you have to say about legalization vs. decriminalization, and the war on drugs, in general?
I can get behind decriminalization absolutely, which would have to come with the release and expungement of everyone with current charges ruining their lives. As far as legalization and the medical circuit…am I ok with spending 40-100$ to get a license to smoke something that I could just grow, so that the same super rich white folks can keep making the same money and we can keep locking people up? That seems unfair to me. Somebody’s door is getting kicked in for some plants as we speak, and the rest of the country is talking about how and when..it’s nuts

Bonus Question #2: What is your opinion on how best to handle the recent wave of racial intolerance, violence, and injustice that has been on the rise in North America? Do you feel that as a hip hop artist, you have any responsibilities in this regard? Why or why not?
Yeah, absolutely we have a responsibility. We’re supposed to be the voice of the people, and it isn’t just, “act cool,” and, “be fly” time. The generation before us led the fight against stopping war. A lot of metal bands I grew up with are heavily involved in speaking out, in activism. We’re all in this together, and the open forum of hip hop gives us a better chance to exchange views and values as people. If you can’t get behind tryna get everyone seeing each other as equal, I mean, you’re probably part of the problem. That said, if you don’t know anything about an issue, it’s better sometimes not to speak on it. Like, sometimes it’s ok to shut your mouth. [Laughs]