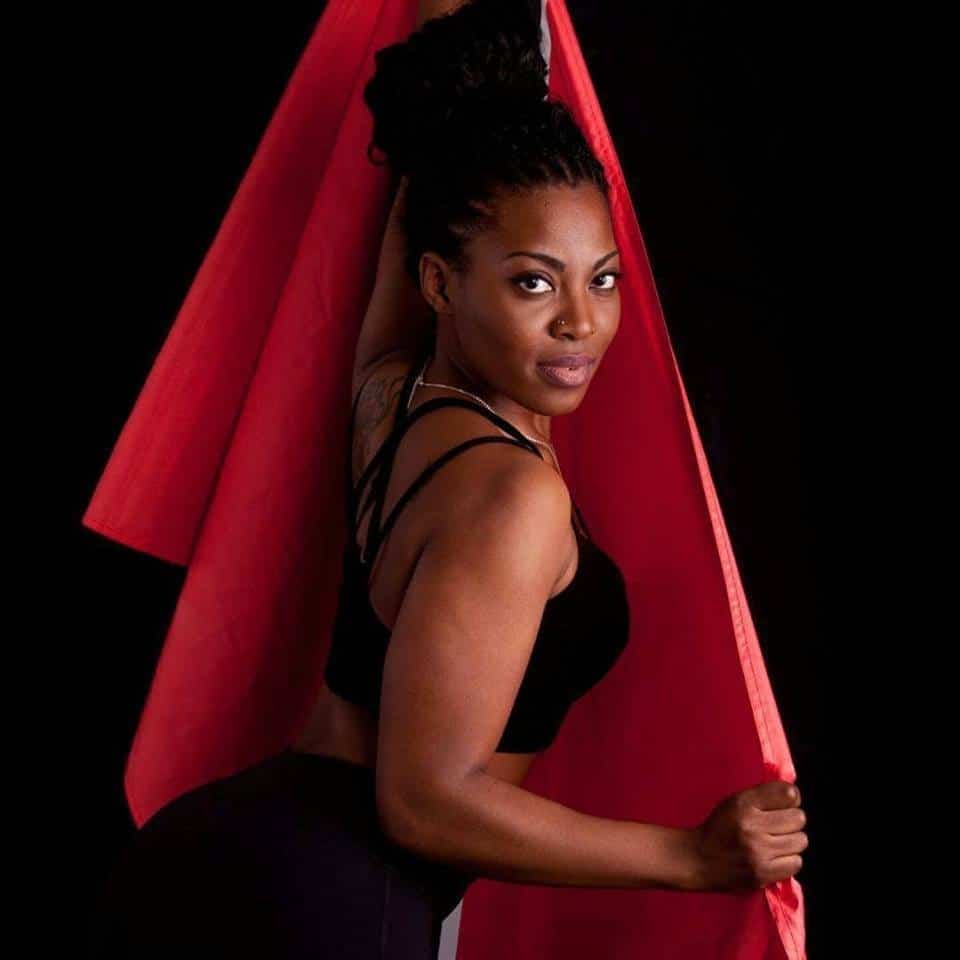 Can you tell us a little bit about SocaFit?
SocaFit is a Caribbean inspired fitness class which is centered predominantly around Soca music. A dance/bodyweight exercise class, that is

What musical trend would you like to see end right now and never, ever come back?
Oh gosh. Sh*t, um [laughs] I have to remember other people are gonna be reading this sh*t. The whole twerking thing, because being from Trinidad and Tobago, it’s wining, not twerking. It’s been around forever. Reinventing the wheel doesn’t make it new…but I’ll step off my soapbox now

What’s been your favorite collaboration to take part in so far?
In terms of dancing, I’ve had a lot of opportunities to open up for a lot of artists. Been a dancer with the Fly Girls for over 10 years. For me, the most exciting was back up dancing for Kerwin Dubois, he’s a Soca artist from Trinidad, and I was given the opportunity to dance for him when he performed at Cari West. That was probably the one I was most psyched about

Who are three artists/dancers you would you like to work with in the future?
Mashel Montano, I think he’s be the only one. In Trinidad we have something called Soca Monarch – it’s an international concert, and my dream would be to dance for any artist on that stage in Trinidad

What made you want to be a dancer?
I grew up in a family heavily involved in music. My dad plays the steel drums, and he actually started Cari West in Edmonton. I was dancing in the womb; my mom was part of Cari West. It sounds cliché but I do feel like I was born with it, and I feel like it is something that I’m destined to do

What’s the advice you’d give to somebody who wants to follow in your footsteps?
Just do it. Don’t let your fears, or opinions from anyone else, get in the way of your goals. Stay focused, almost like tunnel vision, and go hard

What’s the best part of job?
Seeing people’s reactions to Soca. When they first hear that beat drop. I always hear people say they can’t dance – but Soca is one of dem riddems that just pulls it out of you, you have to move – you are left with no choice. Seeing the confidence come out of people in class, that’s the best

What’s the hardest thing about your job?
I honestly don’t think there’s anything hard about it. When you can connect with music as deeply as I can and really vibe off the people who come to class, there’s a recipe for no failure. I don’t find it hard at all…Wait. Now that I think about it, the hardest thing is getting people to try something new. They hear “Soca Fit”. They’ve never heard of Soca, and of course they fear fitness, so trying to get people over their fears to try something new is the hardest thing. People are used to fitness classes being a judgmental, discouraging thing, so tweaking the perception and letting them know that it’s not like that

What inspires you, in general?
Music

What other styles of music inspire you?
Besides Soca? R&B. Old school stuff, like SWV, En Vogue. The type of music that takes you back to when you were getting over that first boy. Polar opposite of Soca but that stuff with good lyrics and a lot of soul. Dancehall, too

What are three artists you’ve got bumpin’ right now?
Boyz II Men, Soca mixtapes – any of them, and K Michele

Are there any myths about the industry you’d like to dispel?
[Laughs] I think the biggest myth is, sh*t. There’s some Soca music that has underlying meaning to it, and our dancing is very sensual. We like to wine. Every culture has its body part that it likes to identify with and Caribbean culture is the hips. You go to a fete, you’re wining on someone, it doesn’t mean you’re gonna go home with them. It’s just a dance, and my parents use to tell me that back in the day, too. It’s not about sex, it’s not driven by sex either, it’s y’know, the music. Why is it so different when Britney Spears sings about sex? Is it because our riddems are better? [Laughs]

Is we finish, or is we done?
[Laughs] we’re never done. Never, ever

What do you have coming up that we can all look forward to?
Cari West, again, being engulfed in my culture. I am on the board, for promotions and marketing, and let me tell you – it’s been a crazy week. August 5-7, and I can’t wait. Also, more Soca Fit classes and boot camps – we’ll be traveling Alberta with those boot camps.

What, to you, is ‘Living the Dream?’
Being happy, being proud of what I am doing, Representing myself, my culture, and my family – truly, not watered down, the raw truth about being Trinidadian, growing up in a Trinidadian family in Edmonton. Having my people proud! [Laughs]

Any shoutouts?
Shout to the Trini posse! [Laughs] and to everybody who’s supported Soca Fit from day one, which was three years ago. To everyone who’d tried it once, who’s shared a post, anyone who’s supported me. You’re the real MVP. And Errol Scott, my fiancé. Can’t forget him!

Bonus Question: With the legalization of marijuana at the helm of North American politics, what do you have to say about legalization vs. decriminalization, and the war on drugs, in general?
I personally don’t do drugs, but I mean, it doesn’t affect me. I don’t really pay attention to it, but if you wanna do it, go ahead. I grew up in Morinville, so I mean, that sh*t was everywhere.

Bonus Question #2: What is your opinion on how best to handle the recent wave of racial intolerance, violence, and injustice that has been on the rise in North America? Do you feel that you have any responsibilities in this regard? Why or why not?

Huh, so. With everything that’s been going on – I think I reached a breaking point with Alton Brown. Not to say I wasn’t paying attention before, but that…I was at work, usually I’m pretty strong, but I started bawling and I didn’t know what to do. It was there and it hit me, very hard. I had to shut myself off of social media because it was affecting me negatively; I was looking at others differently and felt they were looking at me differently. The people around me saw a change in me – I’m normally pretty happy and something was definitely off. I definitely support the Black Lives Matter movements both in the states and here. People need to speak up, that is the only way we can evoke change.

Growing up in Morinville, there were 2 black families. Mine and my best friend’s, and we grew up on the same street. I never thought I experienced racism until grade 12 when I looked back and actually understood what was going on. I’ll never forget it, my dad sat me down and he said,”Cherelle, you’re black. That means you have to work twice as hard and do twice as much”. I always told him that it wasn’t like that, that the world wasn’t like that anymore, but I was young and naïve. I’m so glad he reminded me of that my whole life because I can’t imagine my life if he hadn’t have drilled that into my head.

I hope the world does change, but until then I’m here supporting