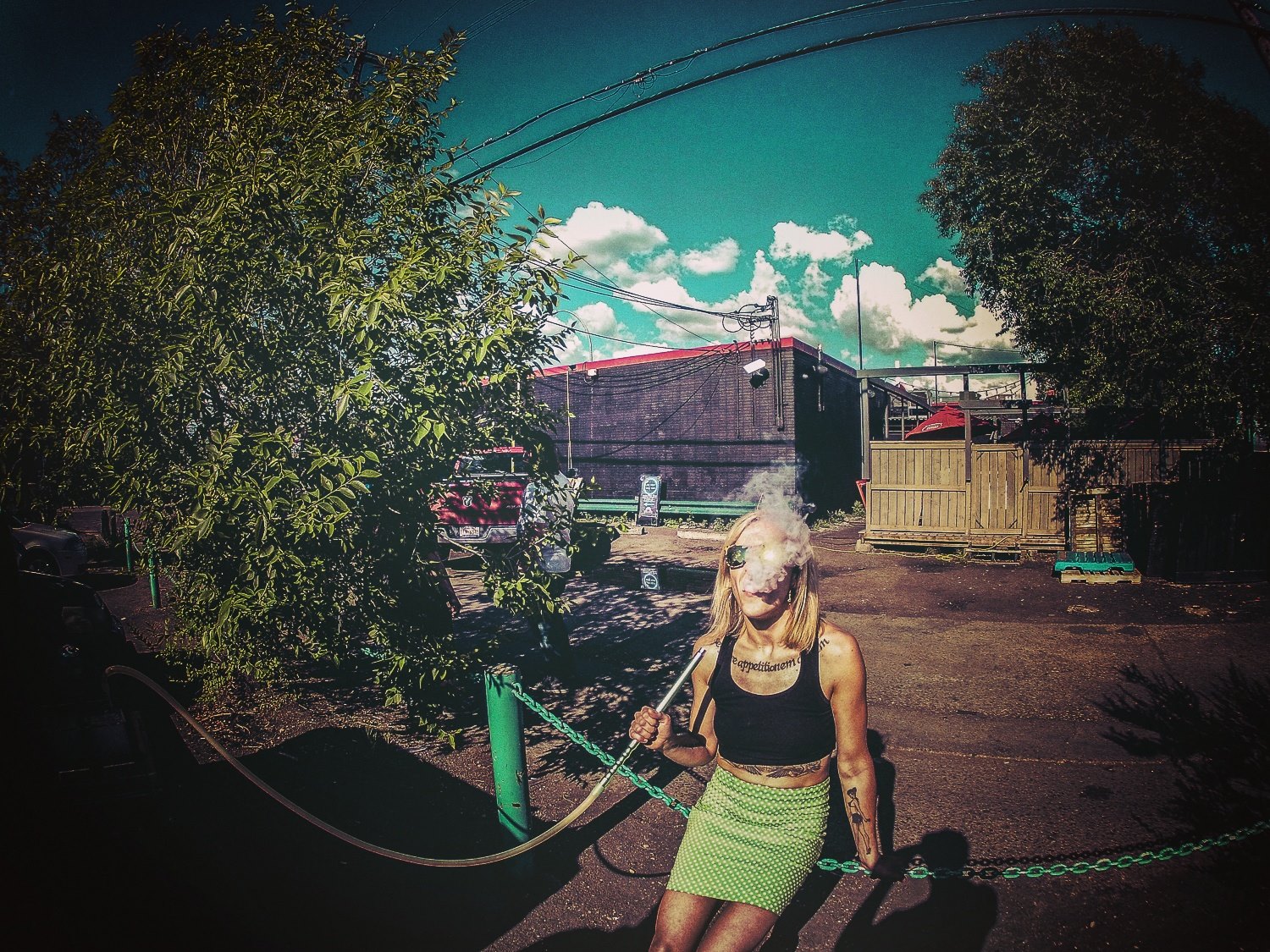 How long have you been a photographer?
Thirteen years. I was living in Montreal, studying at McGill, and with my student loan money, I bought a camera at a vintage store in St. Catherine’s. I only allowed myself to shoot black and white for the first year or so, I felt like I had to learn form and composition before I was allowed to add colour. It’s funny how we come up with these little rules for ourselves, but I feel like I was more disciplined back then. These days, I mean, if I’m on a diet and wanna eat a burger, we all know how that’s gonna go [laughs]

What’s your favorite food?
Perogies.And raw garlic – not together though. Raw garlic is so good for you, it’s an antibacterial, an antifungal…I’m gonna live forever [laughs]

What’s your favorite city?
Berlin. I lived there for a couple of years before I moved back here, and I was supposed to stay, When I finished art school in Vancouver, I sold everything and moved. I was supposed to stay there forever, but I lasted two years. It’s a hub for the misfits and artists of the world, and I absolutely adore it. It was so beautiful, but I can’t even describe it – you have to go experience it

Who’s your favorite artist of all time?
Oh god, of all time? Geez. I don’t know if I can answer this. Tori Amos

What trend would you like to see end right now and never, ever come back?
[Laughs] It’s not even a trend anymore, but can we end the bitstrips, please?

What’s been your favorite collaboration to take part in so far?
Y’know what, last year I decided I was gonna get into video because  of a friend of mine, Jason, also known as OhAces. A friend of mine was also shooting in Costa Rica, I went and watched her doing her thing, and I decided I was gonna do the same. The first few videos I did were a little haggard, mostly because I was doing my own music, but I worked with Jay and he did some mini mixes that were set to my videos that took my work to a completely different level. It’s been awesome. I’d love to get into music videos now, all the creative control and start to finish concept would be so fun, so free. I love the freedom that comes with creating a concept from the ground up

Who are three artists you would you like to work with in the future?
John Rolodex, he runs Machinist music, he’s like the DnB guru of Edmonton; there’s a painter in Calgary named Hannah Malcolm – I’d love to make a collaborative shoot happen where she body paints a model and I photograph it – and, you know what, I’d like to collaborate with someone on video, because I feel like I have a lot to learn. I recently did Astral Harvest media, and I feel like more work like that would be to my benefit. I’d like to find people to collaborate with on video, so I don’t really know who specifically in the future, but someone local and with some knowledge under their belt

What made you want to be a photographer?
Y’know what? My friends. My crew in Vancouver. I had been doing it there, built my own darkroom and everything. My friends pushed me to go to school and do it professionally. It really was their support and their pushing me that made me see that I could, and can, do this. It was the best year of my life [laughs]

What’s the advice you’d give to somebody who wants to follow in your footsteps?
Be prepared to do way more, constantly, than you think is even humanly possible at this point. It’s gonna take fifty times more effort and time than you even know you can put in to make this a full-time job. To give it a real go, it has to be your everything, it has to consume you

What’s the best part of your job?
People are often nervous when they’re getting photographed, they get camera shy. I assure them that this is my job, what I’m good at –  when I’m next to someone and they see a photo of themselves that they love, seeing them light up when they see how good they look, that I’ve captured that inner beauty – when they light up, I love that feeling. It’s an amazing thing, really

What’s the hardest thing about your job?
Convincing people to pay me enough for it. This is not exclusive to Edmonton, I think it’s just a truth as a freelancer in the music industry. In bigger cities, the concept of usage fees is a given, but here you almost have to sell that concept, which is frustrating

What inspires you, in general?
This is the weird thing, I don’t know what used to inspire me before, but I have to give you my gut answer. I hope this doesn’t sound too jaded [laughs], but whatever if it does, it’s the truth. The constraints of circumstances in people’s lives, that inspires me. The pain, the struggle; it’s our outlet for feeling passion, for creation – there’s so much you can’t control in our regular lives, but art, creation, and the why behind creation…that’s where I find inspiration

What’s your favorite color?
Blue. Always has been, always will be

What’s the best piece of advice you’ve ever been given?
I grew up playing volleyball in the hood [laughs] we were always the underdogs, and I had amazing coaches growing up. We all had shitty circumstances, we were poor. We were taught that even when you’re at rock bottom getting kicked, you dig deeper inside yourself and pick yourself back up. Sports, athletics, that’s what shaped me. It’s heart, giving everything. You’ve gotta have heart, grind it out

What are three artists you’ve got bumpin’ right now?
The Polish Ambassador, Jamie Jams, and the Knife

Are there any myths about the industry you’d like to dispel?
That it’s glamorous. [Laughs] I’ll just leave that one there

Is we finish, or is we done?
[Laughs] What does that even mean? We not done. We not finished, we not done

What do you have coming up that we can all look forward to?
This week, I actually submitted all of my Astral Harvest pictures, and they’ll be released on their Facebook page soon. I’m so excited, this is the dawn of a new era in my career for me. I want to involve my kids in my art, half because I have to; and half because I want them to have a chance to enjoy art, to try it. I was very academic, was raised in a very academic family, and I want my kids to have a chance to be creative in addition to being smart. I feel like they’re equally valuable and important lessons to teach my children

What, to you, is ‘Living the Dream?’
This is a big one. I dunno, I think it’s just waking up without a feeling of dread or anxiety, not feeling trapped. That freedom, to wake up and do what you’re passionate about. Being able to involve my family, get my children interested in creating. I feel like that would help me grow, and that it is attainable – it’s coming, it’s on the horizon

Any shoutouts?
Absolutely! Dean (Future Roots) and Donovan (Funk Bunker) – they’ve given me every opportunity that I’ve asked for since I met them and discovered the drum and bass scene here, about a year ago. The whole reason for anything artistically that’s been happening in my life recently is thanks to them. I don’t know if they ever even sleep, they hustle hard, and if any of us can do a fraction of what they do, we’d all make a lot of things happen

Bonus Question: With the legalization of marijuana at the helm of North American politics, what do you have to say about legalization vs. decriminalization, and the war on drugs, in general?
Um, the war on drugs..I mean, it exists because of the pharmaceutical companies, and keeping people sick. Marijuana has so many health benefits, but god forbid that anybody find that out and conversely, not have to spend money on big pharma. The war on drugs is literally funded by these massive pharmaceutical and drug companies, and it makes my skin crawl. I know it sounds a little conspiracy theory, but it’s true. I think decriminalization is a shorter term solution than legalization. In the long term, with legalization and the proper education of the public with regard to all “street” drugs (and I say it that way, because for some reason, if a doctor prescribes things, it’s okay…), then I feel we’d be on a really positive path as a society

Bonus Question #2: What is your opinion on how best to handle the recent wave of racial intolerance, violence, and injustice that has been on the rise in North America? Do you feel that as a member of the media, you have any responsibilities in this regard? Why or why not?
Well, I’ve never thought about having that kind of responsibility or influence, so thank you for that question, actually. It’s a great thing to consider. What should be done is what’s always had to be done. The opposite of apathy. We need to act, to stand up, to say or write something, to not leave a shitty Facebook comment. I think there’s a lot of things that get said, a lot of lazy answers. These are issues that aren’t exclusive to our generation, they aren’t new, they were being lazily discussed in the 50’s, 60’s and so on, too. We have to choose to not sit on our asses, and instead say something. We have to act – that’s the only way