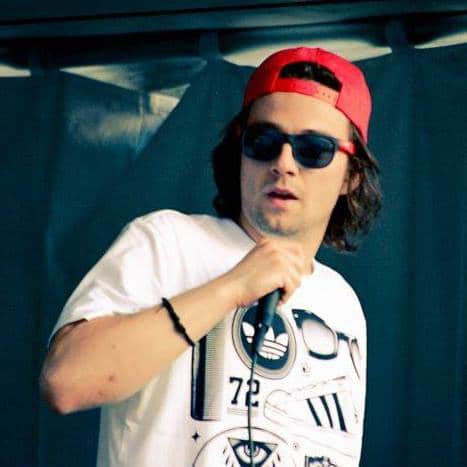 How long have you been making music?
Um, I started doing little raps when I was like 14. It built from there, making beats a few years later messing around with FruityLoops, to a high school rap group Elevated, to producing my own kinda thing more seriously. Then, I hooked up with my band, Boosh and the Dip, and producing with that. All in, about 13-14 years, and I’ve been in the shadow of the hip hop community since I was like 16, with Wildstyle Wednesdays

Who’s your favorite artist of all time?
Sh*t, uh, just give me a couple minutes here. This question makes me nervous! It’s probably Nas. But that’s, that’s a messed up question [laughs]

What musical trend would you like to see end right now and never, ever come back?
That very commercialized, poppy country music. And I suppose any sub-genre that’s been taken to any commercialized plastic form

What’s been your favorite collaboration to take part in so far?
I haven’t collaborated with too many MCs for the last little while, but I’d say the collaboration with Boosh and the Dip is my favourite, and further to that, working with outside musicians, like John Sweeny (saxophone) Claire Simpkin (Cello), and Tyler Rae (piano) – working with as many musicians as I can, really – that’s my favorite

Who are three artists you would you like to work with in the future?
The Game, Justin Timberlake would be dope, and Aloe Blacc

What made you want to be a hip hop artist?
I guess it was just the music that spoke to me. I started listening at a very young age. I think to be honest after I heard Eminem I started writing little raps, and it grew from there. But I guess I was in that situation where I became an artist, a hip hop artist, because of Eminem

What’s the advice you’d give to somebody who wants to follow in your footsteps?
Just follow your gut. The majority of people will tell you this and that, to make more rational choices, or perhaps that y’know, maybe this thing isn’t for you. The older u get the harder it is to follow something like that, so the time is now. Follow your dreams

How long does it take you to write a song, on average?
Um, there’s like two sides of it, I suppose. When inspiration hits you right., you could write all the verses or make the whole beat in an hour or two – it just spills out of you. In my process, at least, it takes – from the first inspiration to presentation – I mean, I have songs that have taken up to two years to finish. One verse might take me twenty minutes and the next won’t come until the next year

What inspires you, in general?
It could be the smallest thing, like um, just the way a tree is leaning, or y’know? The most simple things. I listen to a lot of CKUA and a lot of random music hits me, too

What other styles of music inspire you?
Uh, jazz, soul, really, it’s any music but I guess the other main ones are anything with brass – ska, and big band

What are three artists you’ve got bumpin’ right now?
Locksmith, J Cole and Chance the Rapper

Are there any myths about the industry you’d like to dispel?
Um, I think myth of blowing up or get rich quick or any kind of shortcut that you might have heard about. People don’t just come up out of nowhere, the only way is hard work, whether people see that or not

Is we finish, or is we done?
We done

What do you have coming up that we can all look forward to?
Um, there’s a uh, most recently September 23 and 24. Also, there’s this event called Streets Rise Up, it’s a music festival on Whyte where last year we had 40 local groups, MCs and local bands play out on the street. It’s a fundraiser for a great cause, it’s like busking. People throw their money in the guitar cases and it goes to Boyle street. We’ll be looking for artists pretty quick here, actually. Finally, Boosh and the Dip has RCR2 coming out next year

What, to you, is ‘Living the Dream?’
It really just, uh, doing what you love on a day to day basis. Not being tied up the majority of the day and being able to just do what you love, what you’re passionate about

Any shoutouts?
Shoutout to Tuffhouse, and the Dip, Chris Saltel – his baby girl was born today! – his brother, Jordan Saltel, J-reds, and Bob Howse

Bonus Question: With the legalization of marijuana at the helm of North American politics, what do you have to say about legalization vs. decriminalization, and the war on drugs, in general?
I think that it’s really cool. A lot of people see it as a victory, and it kind of is, but I don’t think we should let our guard down thinking that the government has your best interest in mind. The war on drugs is crazy, but that’s a whole ‘nother conversation, I guess

Bonus Question #2: What is your opinion on how best to handle the recent wave of racial intolerance, violence, and injustice that has been on the rise in North America? Do you feel that as a hip hop artist, you have any responsibilities in this regard? Why or why not?
Yeah, I definitely think so. Being a hip hop artist  means that I am responsible in bringing people together on social issues; and being a white hiphop artist, staying true to the culture should be the main responsibility as it is something I have borrowed and should be respected as such. It’s important to break barriers down and bring people together in any creative way possible. How to stop the violence and racism..well, God only knows. Have faith, and that’s it, I think