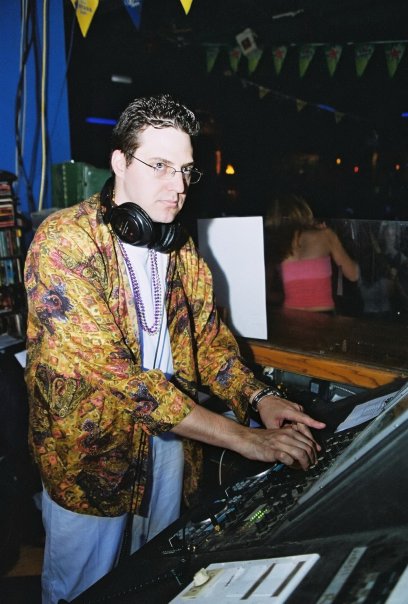 How long have you been making music?
I’ve been spinning tunes in the club scene close to twenty-three years and doing the mobile DJ thing with my company for nearly thirteen years.  As for making it (producing) haven’t really thought much about it but am getting close to having the drive to do it

What’s your favorite food?
Besides everything? [Laughs] But truthfully I love tacos, and making meals from scratch (stirfries, homemade burgers, various other dishes)

What’s your favorite city?
I love my town (Lethbridge, Alberta) because I was born and raised here.  I haven’t done a lot of travelling but love Seattle, Washington. As for Canadian cities, I’d have to say Edmonton, Alberta (I loathe Calgary)

Who’s your favorite artist of all time?
Jethro Tull without a doubt.  I love music in general and like different styles depending on my moods and such, but Tull’s musicianship and lyrics appeal to me on a whole other level.  Roxette is a close second.

What musical trend would you like to see end right now and never, ever come back?
Screamo (the screaming emotional crap), the lame ass hip-hop and Rap, Trap and Dubstep (while there is creativity in it, I get that, but it’s noise, not real music. Give me melody!)

What’s been your favorite collaboration to take part in so far?
Tag teaming on the decks with one of old buddies DJ Opie. We feed off each others energy and work well together.  And currently working with my buddy DJ Carpel who is just getting into the industry of DJ-ing, so I’m guiding him along as he said he wanted to learn from the best, which is extremely humbling

Who are three artists you would you like to work with in the future?
Anyone who has a passion for music. So no specific artist per se

What made you want to be a DJ?
Before I was really a club DJ, I filled in at a local bar and played more adult contemporary and country music for the clientele. At the end of one night, a couple who were just passing through on their honeymoon came up and said that he respected the fact I treated them like a person when they requested their song (which I played) and not like a customer or like they were less of a person than me, because of what I did.  And also, the fact that so many people in my DJ career have smiled because I played the music they wanted to hear.  To me that is the ultimate end result

What’s the advice you’d give to somebody who wants to follow in your footsteps?
Well, currently my friend DJ Carpel (Dami) is doing well and I keep encouraging him and he keeps thanking me, but I tell him to have fun in his job.  The guy that trained oh so many years ago, said, “If that day comes where you’re not having fun, then get out of it.” That’s stuck with through me, and I encourage all new and upcoming DJs to have fun, and to be humble because there will always be someone better, just be good at what you do

What’s the best part of your job?
Seeing people smile, and feeling that energy that a mass of people enjoying the same music can produce.  Plus I get paid good money, am allowed to have drinks, and to talk with the pretty girls and watch them dance

What’s the hardest thing about your job?
Sometimes, it’s dealing with club owners that think they know what’s best for their club when; in fact, they don’t.  I don’t have my many years of experience for them not to put their faith in what I do.  Also dealing with the self righteous next generation.  Sure I’m older, but treat me with respect, and I will show you the same courtesy

What inspires you, in general?
To constantly strive to be the best. Helping others to succeed as well because I know my club days are winding down (need a replacement soon) Leave a lasting memory in people that they had a good time

What other styles of music inspire you?
I love film score music, it has such awesome flow. By itself, it is wonderful to listen to, but then you put the imagery of the film in front of it, and the music amplifies the emotion on the screen. Love the 60’s as well, and have always had a soft place for pop music (yes Britney Spears, and the rest of the bubble gum pop music, just something about it). Never been much on jazz (although I played when I played in the jazz band in high school), and classical is ok (but I’m quite selective on what I like)

What are three artists you’ve got bumpin’ right now?
Hmm… in the club, the big three would be actually Fetty Wap, Drake, and (still) Sean Paul.  Personally though, Roxette (mostly their newer albums) new A-Ha and Madonna

Are there any myths about the industry you’d like to dispel?
Not all DJs get to take the hot girls home at the end of the night (I always wish it but it doesn’t happen like that). And not all DJs are drug fiends or know where to “get/have some”.  I’ve never ever done drugs and know a few people that deal it, but that’s about it

Is we finish, or is we done?
Well, not too sure I understand the question, but my club career is winding down due to age and the late nights and such.  But my business career is really on the rise and I look forward to many more parties, weddings and functions over the next 10-15 years

What do you have coming up that we can all look forward to?
I want to get into some producing and making a few tracks, and helping other first time DJs realize and achieve their potential, call me a professor so to speak [laughs]

What, to you, is ‘Living the Dream?’
Enjoying what you do for a living and making a career out of it, and now a business out of it as well

Any shoutouts?
To the guy who trained me, Ryan Tapping. Last time I actually talked with him and I explained all I was doing he said he’s glad I exceeded expectations of me to him. [Laughs] He was an ass and hard on me, but pushed me to be partially who I am today, the rest I modified myself.  DJ Opie (Kris Caldwell) for being a guiding light when it came to getting my sh*t together and wanting to make the business work. The kid is brilliant. And also, to Shad Chollack who also guided me into the business side of things and helped me along the way


Bonus Question: With the legalization of marijuana at the helm of North American politics, what do you have to say about legalization vs. decriminalization, and the war on drugs, in general?
I have no problems with marijuana users (only with chronics) whatsoever.  It’s a plant, for Pete’s sake. My real problem is with all the synthetic stuff where people are constantly looking for that new high or higher high. And the highly addictive stuff like cocaine, crack, etc. They really need to focus their attention and combat the people that sell or make that stuff to younger people, essentially ruining their lives.  I may be friends with a few of the “dealer types” but I don’t have a lot of respect for them.  It’ll always be a neverending war but we can hope that the hard drugs get eliminated

Bonus Question #2: What is your opinion on how best to handle the recent wave of racial intolerance, violence, and injustice that has been on the rise in North America? Do you feel that entertainers have any responsibilities in this regard? Why or why not?
I don’t really know what started all of it. I think social media has a lot to do with the blame of it, and people are more and more concerned with their own agenda.  Unfortunately, I would say the best way to handle it would be to remove those in power positions that are causing it, but the horrible thing is it’s the higher uppers that are even more corrupt and causing much of the problems (trickle effect I guess to say).  Entertainers can and have said and tried to all that they can.  Sure they’re the voice of the people, but a lot of them are the cause of it as well.  We live in a society where we glorify and welcome hate and suffering than happiness.  If you turn on the news, it’s 95% despair, anguish, hate, et cetera, because that’s what sells and gets people fired up, but then they’ll do a happy little story at the end to try and make you feel good.  Going back to the entertainers and such, they can try and help out but again, we as a people would rather see Kanye and Kardashian be at odds with each other than hear someone like Morgan Freeman speak out against it (which he has about the Black History Month stuff). I suggest we grab a bowl of popcorn, sit down on a lawn chair and watch them tear each other to pieces because that’s where it’s heading, I don’t think we can salvage it right now