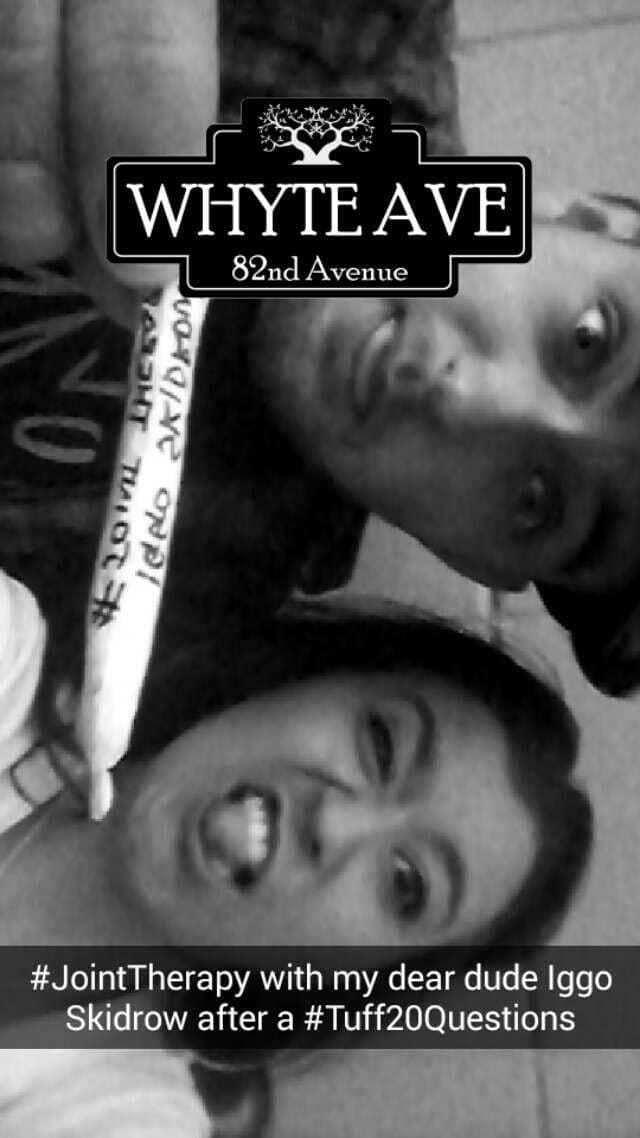 Join Iggo Skidrow, the Hedonist, and the Tuffhouse family at the Joint Therapy / Birthday Party on Friday, July 15th at DV8 in Edmonton! [Click Here for More Information]

How long have you been making music?
Since I was three years old, I started playing piano, my dad taught me, and I played almost every day of my life until I was about eighteen years old. He gave me lessons every day, they were forced on me back then [smiles]. From there I picked up guitar when I was about 14 with my buddies, but to that point, it was all just covers and copying music. I never really started creating my own music until I started rapping, about 4 years ago writing my own raps. But I mean, I rapped over CDs my whole life. I beatbox too, I picked that up before I started rapping. My buddies and I used to beatbox outside of bars, or during ciphers. Other people would freestyle on top of it, I never thought I’d be rapping one day, too

What’s your favorite food?
I don’t even know, probably a nice fresh Osooyos peach. I don’t think there’s anything that quite beats that: minimal prep, straight from nature [laughs]

Who’s your favorite artist of all time?
Ace Riggity Rock [author’s note: that’s Aesop Rock, of Rhymesayers], and that’s pretty easy. Skill, really perfecting the art lyrically. The dude can write like three pages on Gandalf’s beard, and he’s like the Tolkien of rap. He’s definitely off the beaten path, which I think in a way holds him back, but he’s definitely my favourite. Especially his “Float” album.

What musical trend would you like to see end right now and never, ever come back?
F*ckin’ XXL 2016 [laughs] I mean, it goes further than that. It’s not so much a trend but a classification, a style of music. Desiigner, that whole thing. There’s a distinction there, and I don’t really think it’s rap or hip-hop so much as it is entertainment. To that effect, yeah, it is horrible rap and horrible hip hop. I mean, it’s not about the bars. It isn’t about the lyricism. It’s just not the same thing, so I’d like the hate to stop happening. They’re getting successful, so what are you hating on? We just need to re-classify it as its own thing

What’s been your favorite collaboration to take part in so far?
Man, I don’t even know. I know “Collabs for Days” was really awesome, cause I got to work with so many artists. So far, my favourite is probably DJ HAWTJNTZ, but that’s as a DJ working with me as a rapper to create a dope, interactive set. Sonik and Trippz was super dope too

Who are three artists you would you like to work with in the future?
Okay [laughs] y’know, it’s kinda like that answer would change every single day. That being said, Atmosphere, I’ve always wanted to work with Classified, and one more, eh? Jesus Christ, I’d love to work with Timbaland. Jay Electronica is super dope too. Super meaningful with his lyrics and everything he’s doing

What made you want to be a hip hop artist?
When I hit the lowest in my life, writing was really helping me to get some shit off my chest and not bottle emotions, but like address them. It was working for me, it was therapy. When I was growing up I wanted to be a marine biologist or an astronaut, but when I wanted to pursue hip hop was when things were really happening, y’know? It was just working

What’s the advice you’d give to somebody who wants to follow in your footsteps?
In my footsteps? F*ck, good luck! [laughs] In life, in general? My footsteps aren’t really the ones to follow, I’ve been down and I’ve been Skidrow! [smiles] I think it’s more about what you can learn from my footsteps, not so much how you can follow in them [laughs]

How long does it take you to produce a song, on average?
I listen to the track for 2-3 weeks to really learn the instrumental and really nail my concept, then I’ll write the song in about an hour and a half. After that, I memorize it, hit the studio, record the roughs, then it’s pretty much done the next day

What’s the hardest thing about your job?
Finding the time amidst the daily drudge of paying bills, and not hustling [laughs] that’s what holds me back, not the motivation

What inspires you, in general?
What inspires me is uh, looking at where I’ve come and imagining where I could go. And also, seeing people around me taking the same steps and being successful in their endeavors

What’s your favorite color?
I’d have to say, well, hmm. Depends on what, but I’d say green or orange

What other styles of music inspire you?
Classic rock, and then whatever new shit, anything new that I hear that makes me feel something, that makes me question how the artist did it and made me feel that certain way

Are there any myths about the industry you’d like to dispel?
Yeah, ain’t nobody rich [laughs]. People are only as poppin’ as their next move, and it’s not a case of buddy hyping it up with nothing to show for it. I don’t wanna hear about something in the works for years with nothing to show for it. There’s a lot of people out there who call themselves rappers that aren’t doing their thing, y’know? But then there’s people who live and breathe this shit, making moves every single day. That’s who I try to surround myself with, the people who are truly doing hip hop every single day. That’s where the truth is in this art

Is we finish, or is we done?
I dunno, I don’t even think we started yet [laughs]

What do you have coming up that we can all look forward to?
JOINT THERAPY! EP gets released on Saturday, and we have the show, the “pre-screening” tomorrow night at DV8. From there, I’ll be performing this new set at my first festival ever, Motion Notion, and on my birthday, too. That’s what I’m stoked for

What, to you, is “Living the Dream”?
I dunno. I don’t dream, I haven’t since I was very young, since I was thirteen. But sitting out in the mountains on a perfectly sunny day drinking a brewski smokin’ a joint with some of my best friends, not concerned about problems, just livin’ in the now. That’s the dream

Any shoutouts?
To the whole Brostski team, DJ HAWTJNTZ, 4YU Lifestyle – that’s my sponsor, and to every other person who’s out there makin’ moves, anybody out there who’s in this bitch, y’know [laughs]

Bonus question: How do you feel about marijuana, the legalization debate, and the war on drugs, in general?
Smoke it anyways. Probably cheaper now than when it’s legalized. And in terms of the medicinal use, I think it’s about time that we legalize it. If it’s a proven method, I mean, I understand the history but it’s 2016 man, it’s time for us to move on. There’s plenty of news stories about it where people have 200 seizures a day, then take medicinal cannabis, and have none. It’s way better for you than drinking or smoking, so why are those things legal and cannabis isn’t? It’s a joke.

Bonus Question: “What’s your biggest inspiration day after day?” (Tara Lynn Harvey, Facebook)
You want to know my biggest inspiration day after day, eh? Hmm. I dunno. It’s not necessarily a person, it’s more I get inspired by looking at what I’ve done, and what I managed to do yesterday, so that I can do the same or better today. I used to think where I am now was so unattainable. It’s crazy, it keeps the fire burnin’!

Connect with Iggo and Brostski Entertainment on Facebook, and check out the “Fried Egg” music video here.